"Strictly 2010: All Mashed Up" is a collection of my personal hits of 2010 in remixed mashup forms.
From the initial pop smash "Tik Tok" by Ke$ha to the duet by newcomer Iyaz and RnB sensation Beyoncé that became my biggest success of the year (altogether with my old account it would have reached over 150,000 views on YouTube by now), this album comes up with the greatest artists of the year.
Belgian singer Stromae accompanies Lady GaGa who herself joins Eurovision Song Contest 2010 winner Lena from Germany with a dance version of her song "Satellite" while Taio Cruz' hit "Dynamite" has been turned into a clubby house remix. Also included are the anthem of the soccer world cup 2010 in South Africa by K'naan and Mariah Carey, superstar Usher's party tune "DJ got us fallin' in Love" featuring rapper Pitbull and my version of Kid Cudi's "Day'n'Nite" that gave it a totally new twist. It was also aired in one of the known Mash-Up Your Bootz radio shows.
This best of album features the hottest song ("I'll make Love to you") as well as the saddest song I've ever made up to date ("Do Angels Cry" by British neo soul personal tip Lynden David Hall) that transfer the most passionate of emotions. The playlist ends with two brand new tracks by Rihanna and Madcon that already give you a brief glimpse of what the upcoming year will bring musicwise.
"Strictly 2010: All Mashed Up" compiles many of this year's greatest hits and marks the final of the "Strictly ..." trilogy; if you're into mashups and looking for a collection of 2010's greatest moments in music, have a listen! 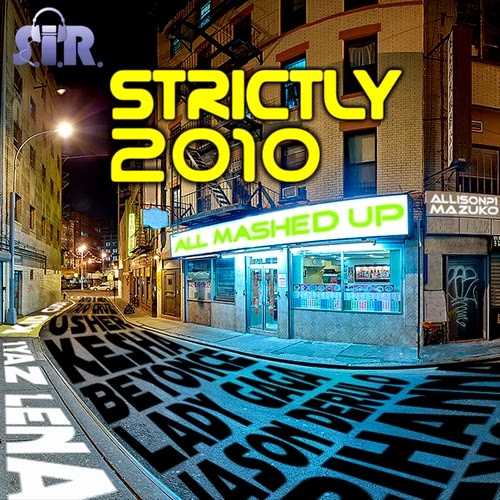 TRACKLIST:
Please note: The blue ones got music videos as well


PLEASE NOTE: You need a program called "WinRar" to unpack the file!


Disclaimer
All mixes linked to on this site are created for entertainment, and as demonstration of mixing and production techniques only. The copyright for the individual tracks used remains with the artist. If you like the mixes I have created, please buy the original songs and support the artists. If you are a representative of either the artist or the publishing company and would like the tracks removed, please contact me directly and I will take the tracks offline.