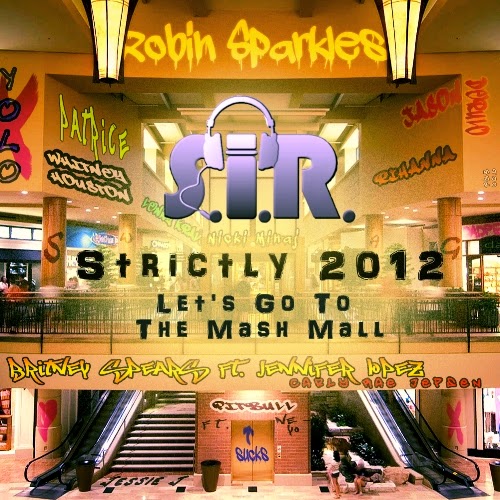 "Strictly 2012: Let's go to the Mash Mall" compiles this year's best S.I.R. songs - your favorite tunes in all new versions.
When you listen to the album I want you to see each single track as kind of a diary page of my very own experiences from 2012. The album starts right away with a new rendition of the song used for the infamous dancing scene in the "Hitch" movie starring Will Smith and Kevin James - this new version is entitled "Give me Everything (Now that we found Love)" and features rapper Pitbull and singers Ne-Yo and Nayer. The name giver of this compilation is of course the great Robin Sparkles from "How I Met Your Mother" with her hit song "Let's go to the Mall" - the perfect song to perform whenever you go shopping. This remix version also got some airplay at local clubs. The most successful song of the year for me undoubtedly was "Dance Again Till the World Ends" by Britney Spears feat. Jennifer Lopez which earned more than 200,000 views on YouTube (splitted on several accounts unfortunately though). Following are new renditions of Jason Derulo's "Breathing", the smash "Call me Maybe" by Canadian singer Carly Rae Jepsen and a sensual jazz interpretation of "Believe in me" by Lenny Kravitz. Also included are an orchestral ballad composition of Rihanna's dancefloor hit "We found Love" and a rnb version of the late Whitney Houston's "I wanna dance with somebody".
This year I especially enjoyed working with new independent artists and people I personally know so definately have a listen to the tracks featuring Interface (a local band by a friend of mine), NYC singer Khaleel Deal and producers Shandy Putra, RoZmX and DJ Rick Lee. The official anthem that I created for our local basketball team s.Oliver Baskets Würzburg (playing their second year in Germany's premier basketball league) had to be included on this album as well of course since it gets played during every home game and always makes the crowd go crazy.
The tracklist closes with three brandnew tracks including Nicki Minaj's "Starships" that will get you into the right mood for christmas I am sure.
If you're looking for a compilation of this year's greatest moments in music in versions that you've never heard them before, "Strictly 2012: Let's Go To The Mash Mall" definately is the right choice for you ... especially since this will be the last new music by me for a while now. Now go and get it!

PLEASE NOTE: The blue ones got music videos!

PLEASE NOTE: You need a program called "WinRar" to unpack the file!


Disclaimer
All mixes linked to on this site are created for entertainment, and as demonstration of mixing and production techniques only. The copyright for the individual tracks used remains with the artist. If you like the mixes I have created, please buy the original songs and support the artists. If you are a representative of either the artist or the publishing company and would like the tracks removed, please contact me directly and I will take the tracks offline.